Forty-one percent of the respondents in this survey work in centers with over 500 agents.  The rest are representative of a wide variety of sizes from under 50 up to 500 agents.  The healthcare, financial, insurance, and “other” industries drew the largest number of participants, but all other industries are also well represented.

Respondents were asked what percentage of their agents worked part-time prior to the pandemic.  Over half (56%) reported that they had 1 to 10% part-time while another 22% indicated that they had none. While there has been a slight shift toward more part-time, the percentages have remained fairly consistent in the current environment. 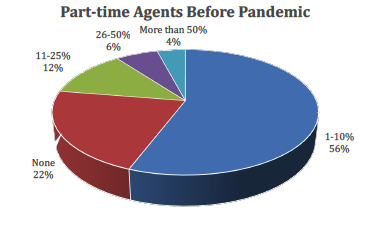 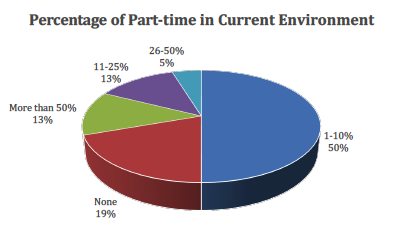 When asked about the frequency of schedule changes prior to the pandemic, nearly three-fourth indicated that the changes were done no more often than quarterly.  In the current environment, over 60% reported that their scheduling frequency has not changed.  However, 25% indicated that the changes are more frequent than before while 11% report they are less frequent.  Some centers may have experienced significant shifts in customer contact behavior which drives the need for schedule adjustments while others may have similar patterns of contact.  Where there have been changes, flexibility to adjust staffing to meet it is critical to achieving a consistent service result. 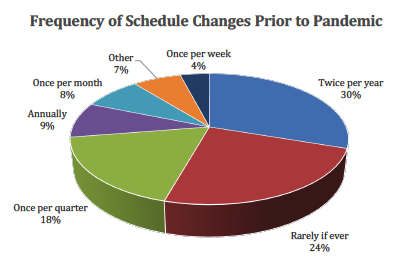 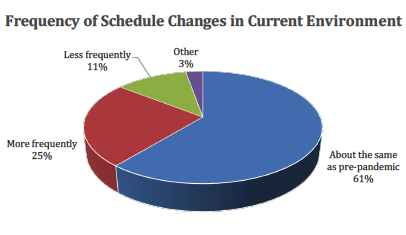 The respondents were asked how much notice agents were given before a schedule change took affect prior to the pandemic.  Approximately one-third gave at least a month and another third at least one week.  Only 7% total gave a day or less notice of the change.  In the current environment, the percentage reporting a day or less of notice has increased to a total of 13% and those giving at least a month has declined from 34% to 25%.  This suggests that changing customer behaviors are driving changes to the schedules as needed. 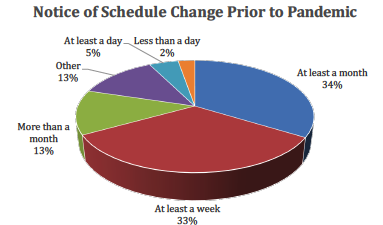 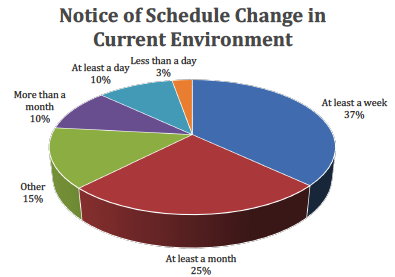 Respondents were asked what kinds of schedule options were used prior to the pandemic and were able to choose multiple options.  Most indicated that they used fixed schedules while approximately half indicated that they used break optimizations and intraday adjustments as needed.  While both fixed schedules and break optimization are also noted for the current environment, the reported use of split shifts and rotating schedules has increased.  With many agents working from home, the option for split shifts is more viable and may be attractive when a commute is not involved.  If that places more staff where needed and less when the volumes are down, it works for everyone. 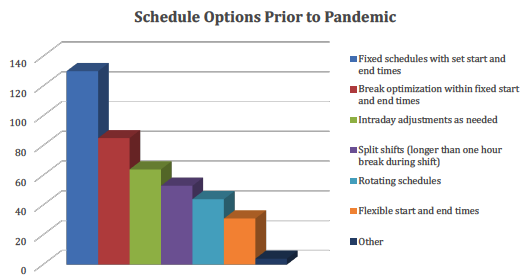 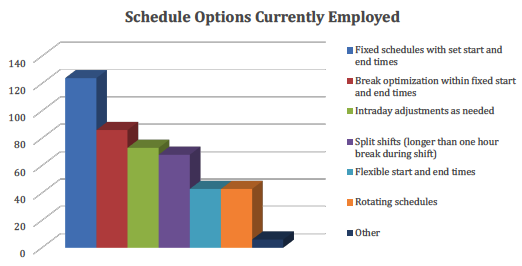 Respondents were asked how the work from home environment has impacted their schedule efficiency (the precision of the match between the number of staff needed and those scheduled).  Half (51%) indicated that it has had no effect while 25% reported that efficiency is improved.  However, 19% reported that the efficiency has declined and this can be the result when contact patterns change but the center does not have the option to change shift patterns to match.

Based on the responses above, many centers are managing their schedules in the current environment similarly to their prior situation.  However, there is some evidence of increased flexibility that has the potential to improve results for customers, agents, and the organization. In the past, there was considerable concern that having agents working from home would negatively impact the results, but this does not seem to be borne out by these survey results.  Most have seen no change in productivity and a quarter have seen results improve.

Proficiency Scoring in a Contact Center:
An Alternative Method of AHT Analytics