Each quarter SWPP surveys the workforce planning community on critical workforce planning topics. Over 200 call center professionals representing a wide variety of industries participated and provided insight into this quarter’s survey on the shrinkage assumptions used in their planning efforts.

Fifty-one percent of the respondents in this survey work in centers with over 500 agents. The rest are representative of a wide variety of sizes from under 50 up to 500 agents. The financial, heath care, and insurance industries drew the largest number of participants, but all other industries are also well represented.

Respondents were asked what percentage of overall shrinkage is used in the long-term planning process. Approximately one-quarter of the respondents indicated that they use between 26% and 30% to represent all types of losses in the staffing from plan to actual bodies in chairs. Another one-fifth of the respondents are on either side of that with either 20% to 25% or between 31% and 35%. The next largest group is at 16% where the respondents use a shrinkage assumption of 36% to 40%. A somewhat surprising 14% assume less than 20% shrinkage overall. Only 4% indicate losses of over 40%.

This shows a wide variety of assumptions that suggests that each operation needs to assess the true shrinkage that is being experienced. Some centers have a significant amount of off-phone work that needs to be factored in, while another may have none. While it is unusual to find a center that truly has a less than 20% loss, a center with lots of new staff with little vacation time, no FMLA, and almost no ongoing training might be able to achieve it. The important thing is to be sure that all actual losses are included in the plan. Failure to build in enough extra staffing to cover the losses will result in higher overtime cost or inability to meet service goals or both. 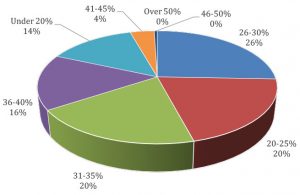 When asked what assumption is made for breaks, the answers are closely clustered from under 5% up to 6.5%. Only a few were over 6.5%. This suggests that the standards for breaks are fairly common with the slight differences probably aligned with a mix of part-time and extra long schedules with assorted break assignments. 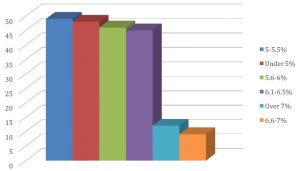 The respondents were asked what percentage of shrinkage they assume for sick time not including FMLA or other long-term disabilities. Over one-third (37%) indicated that they assume more than 5% loss for sick time (equal to 13+ days out of a full-time schedule). The remaining responses are fairly spread out over 2% to 5% with less than 10% of the respondents indicating they lose only 1% to 2% to sick time. Once again, it is critical to use a shrinkage assumption that matches your current experience rather than the entitlement in the benefits plan or the center’s goal. 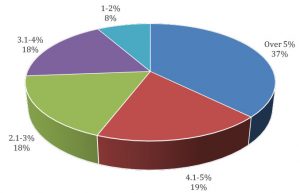 Assumption for
Mandated Time Off 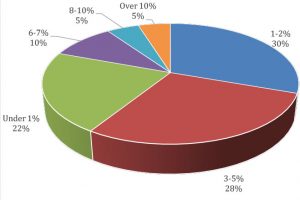 The assumption for vacation time varies significantly. The largest percentage of users reported between 3% and 5% of loss. However, one-quarter of the respondents indicated a loss of between 6% and 7% with another quarter reporting 8% to 10%. Only a few reported under 2% loss.

These wide differences are generally a function of agent tenure. Where many staff have been in the center for years and earned longer vacation times, this percentage of loss will grow. In newer centers or those with high turnover, fewer agents earn vacation time, thus lowering this loss percentage. 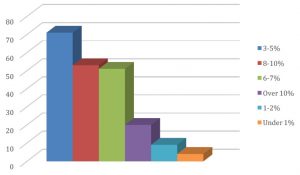 Respondents were asked what assumption was made for meetings of all types (not including any formal training time). Approximately three-quarters of the respondents indicated they assume between 1% and 5% for meetings with a fairly even split between 1% to 2% and 3% to 5%. A surprising 9% of the respondents indicated that meetings produce less than 1% loss. It is not clear if this indicates a lack of team meetings and coaching sessions or if this loss is included elsewhere. On the other end of the spectrum, 2% indicated that they lose over 10% of their time to meetings. 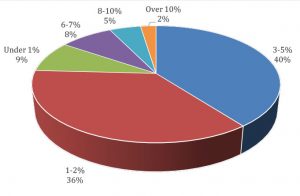 The shrinkage assumption for training time is essentially the same as the meeting time in the chart above. Three-quarters assume between 1% and 5% with a small group over 10%. Once again there are 9% who reported that training time is less than 1%.

This shrinkage assumption is generally a direct reflection on the complexity and changeability of the content of the work and its requirement for constant updates. 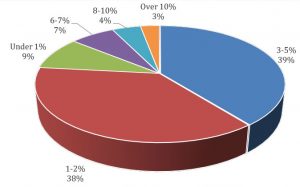 Approximately one-third of the centers reported 3% to 5% is their assumed loss for non-productive time (defined as failure to adhere to the schedule). One-quarter of the respondents indicate that loss is only 1% to 2% with 14% reporting under 1% loss to non-adherence. However, 28% of the centers report the loss is from 6% to over 10%. This is a wide variation among the responding centers.

This is a controllable loss in many cases that can be affected by culture, education, and availability of tools to monitor adherence. The challenge for many centers is finding the balance between “big brother” and employee needs. However, this loss results in the need to hire more agents to cover for those that are missing. Education on the value of the lost time and potential impacts on both customer and co-workers can help to focus agent attention on following their assigned schedules. 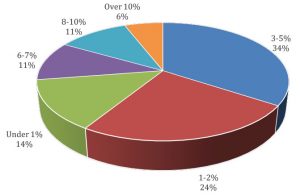 Assumption for
All Other Time Lost

Respondents were asked to provide a percentage of shrinkage loss for all other time that was not mentioned in the charts above. For most (58%), this loss is less than 2%. One-quarter of the respondents assume another 3% to 5% for these losses. For 17% of the centers, the loss is assumed to be over 6% and some over 10%.

When asked to define what is included in the All Other Time Lost, the most common answers were: 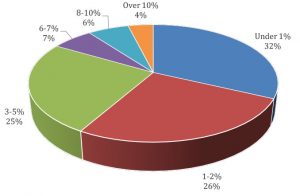 This is a very important part of the plan and one that must reflect the true losses that the center experiences. It may be different on each day of the week or even by time of day and shift. Getting this assumption right can make the difference between meeting service goals consistently and a daily scramble of adjustments to make the goals. 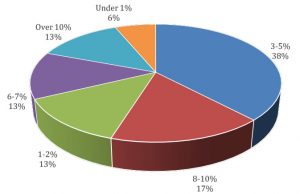 Based on the responses above, the shrinkage assumptions that are used in centers for planning staffing needs vary widely. Of course, the work that is performed in centers also varies widely so these assumptions should reflect the reality of each center’s operation. Some variants are a function of culture, work rules, mix of work performed, and other environmental situations.

It is also important to ensure that shrinkage assumptions are not based on HR entitlements or goals for the center. They must be based on the true experience of losses that need to be covered. If they are too high, then there can be initiatives to lower them over time with changes in procedures and activities. But until the reductions are reality, the shrinkage assumption needs to stay in place.

While this survey did not explore the possibility that the shrinkage assumptions might be different by day of week, time of year, or even time of day, that is a significant issue in some centers. Focus on analyzing the variations in actual experiences can reveal opportunities to fine-tune the shrinkage assumptions and make the scheduling and intraday processes smoother and more accurate.