One of the biggest staffing problems that call centers face today is staff turnover. Finding and then retaining qualified staff has a huge impact on the bottom line as well as to quality of service.

You should be taking a close look at some of the numbers associated with turnover if you hope to manage it better. The two most important numbers are the rate of turnover and the cost of turnover. This article will take a look at ways to calculate turnover rate in several different ways.

Turnover is high in today’s workplace, and some of the overall turnover statistics have significant implications in the call center. According to the United States Bureau of Labor Statistics, workers aged 20 – 24 stay with an organization only 1.1 years on average (compared to 1.5 years just 15 years ago), and workers aged 25 – 34 stay 2.7 years (compared to over 3 years a couple of decades ago). Compared to these longevity numbers, call center workers who generally fall into this age group (ages 20 – 34) stay only about one year.

Research studies indicate that the rate of turnover varies by area of the country, employment factors in a specific region or city, and by industry. There is a much higher turnover rate in routine, order-taking positions or in outbound telemarketing where burnout is high. Turnover is lower in more specialized, higher level jobs and also lower in union environments.

Overall averages for the call center industry as a whole range between 30 – 45 percent, with some centers having almost no turnover, and other centers having turnover in the triple digits.

You should calculate the turnover rate for your center on a regular basis and in many different forms. You’ll want this number for trending purposes and business case justification for programs to assist with retention.

This simple calculation gives you a good starting point, but isn’t all that useful by itself.

You’ll want to take a look at your turnover rate in many different ways. Here are some of the variations that will be interesting and perhaps more actionable than just the overall turnover rate. 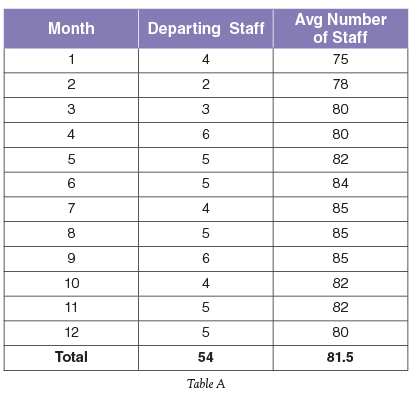 The key is to track the exit rate from the center into other positions and build this into your staffing and training plan. One large financial organization has a high percentage of loss to other departments, with the call center seen as an easy entry point to the company from which one can springboard to other positions. Rather than bemoaning this fact, they’ve tracked and documented the exodus and gotten extra budget dollars for staffing and training programs for preparing staff for taking other positions in the company.

Turnover should also be analyzed to understand the proportion of agents who make the decision to leave the company compared to those that are being terminated. If your company has to terminate significant numbers of employees due to poor performance, there may be a problem at the recruiting and hiring phase. The company may be hiring too quickly in order just to fill seats and may not be screening carefully enough for necessary knowledge and skills or evaluating the personality match with the work environment.

Turnover rates should be calculated for the center, but should also be calculated for smaller defined groups. For example, turnover should be examined by team or supervisor. Calculating turnover rate by team may help pinpoint problems where employees are leaving due to supervisory issues and not because of compensation, job fit, or other factors. Those supervisors or team managers with consistently high retention rates can perhaps serve as “retention models” for other supervisors who can learn from their motivation and management techniques.

You should also review the turnover statistics to see if there is any correlation with the skill or type of calls being handled. Calculation by call type in one organization revealed nearly double the turnover rate for one particular type of call versus any other one due to its difficulty and higher stress levels. When that center was able to allocate more resources to that call handling group and alter performance expectations slightly to make it a less stressful environment, retention improved significantly.

It should be noted that while turnover almost always has a negative effect on the call center, there are some positive aspects. If you are losing personnel that were not performing well, the opportunity to hire replacements can be a positive experience. Bringing in new personnel provides an opportunity to gain new ideas and to obtain some fresh perspectives.

One of the ways to evaluate turnover rate by performance level is to divide your staff into performance groups. The first example below illustrates a situation where turnover is troublesome. The top quarter of performers has a turnover rate of over 30%, while only 15% of the poor performers are going out the door. 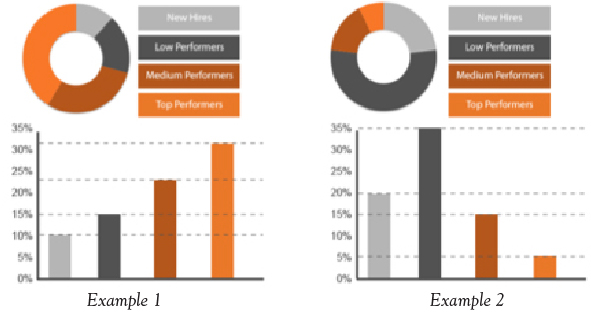 On the other hand, the second example represents a turnover situation that might not be viewed as negatively. In this example, the center is doing a good job of keeping good people, with only 5% of the top performers leaving. Turnover rate is high for the poor performers at 35%, but if you’re going to lose staff, it’s better to have the non-performers leaving.

You should be taking a close look at your turnover numbers if you hope to manage it better. We’ve explored several possibilities here for how to look at turnover rate. Now let’s take a look at some considerations for calculating the costs of turnover.

There are many costs associated with call center staff turnover. Some of these are direct, measurable costs to your organization, while others are indirect costs that may not be so obvious.

Some of the direct costs associated with turnover include the following:

Another hard cost of turnover can be the revenues lost if not enough people are in place to handle the call workload. Let’s assume that delay times are longer while you have a staff shortage and as a result of that, more callers are abandoning their calls. If you are a revenue-generating call center, such as a catalog or reservations center, then there is lost revenue associated with those lost calls.

If your center receives 3,000 calls a day and just one percent of those calls abandon due to the long delays caused by under-staffing, that results in 30 lost calls. If those calls are worth an average of $100 per call, that’s $3,000 of lost revenue per day –
a true “cost” to your company of not having enough staff on the phones.

Consider the following example of a customer service center with 100 employees whose turnover rate is 20%. The frontline staff wage rate in this center is $20 per hour. Each person handles an average of 12 calls per hour (x 6 available hours = 72 calls per day). It takes approximately 2 weeks to fill the position, and 3 more weeks to train new staff. In order not to lose any revenue opportunities, this call center has asked existing staff to work overtime to fill in the staffing gaps, and that overtime rate is reflected below as 1 ½ times the regular wage rate. The wage rate for HR staff, trainers, and supervisors is $30 per hour.

The costs of turnover for this organization to replace those 20 people are as follows: 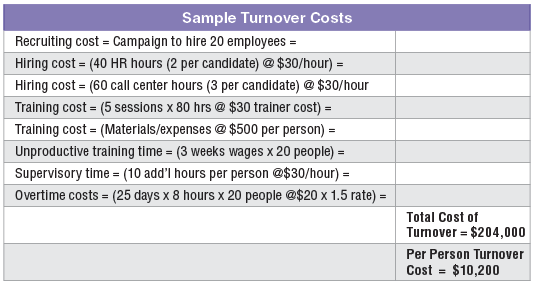 This 20% turnover rate results in a cost to the organization of over $200,000 to replace these 20 people, just over $10,000 per employee. These costs could go higher still if you were to consider the potential loss of revenue and damaged revenue due to poor service.

In addition to the “hard costs” outlined above, you should also consider the harder to measure, but just as important, costs of customer dissatisfaction, damaged reputation, lost skills and knowledge, and low morale. When these costs are factored in too, the costs simply skyrocket.

It is important that your call center be able to quantify all these hard-dollar and soft-dollar costs in order to accurately calculate the true total cost of turnover to the organization. The resulting numbers can be used to justify retention programs that will likely pay for themselves many times if they reduce turnover even a small amount.

Creating a Scheduling Strategy
That is Win-Win

The Essentials of Staff Shrinkage

Don’t Fear Workforce Management
in Non-Voice, Back Office, and Beyond