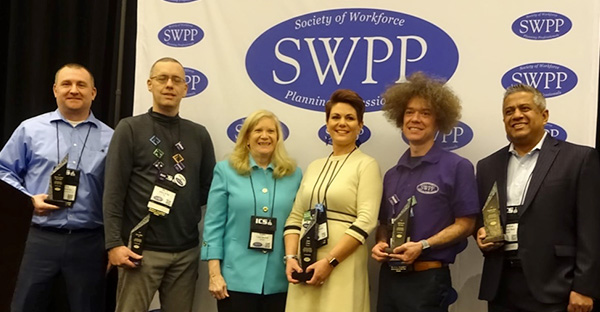 The Society of Workforce Planning Professionals (SWPP) announced Jessie Cessna of Cigna as the winner of the 2022 Workforce Management Professional of the Year Award, which recognizes a workforce management professional who has shown outstanding leadership in the industry.

“We are continually amazed by the quality of nominees for this award, and are so thrilled to recognize Jessie as this year’s winner,” said Vicki Herrell, Executive Director of SWPP.  “Through her leadership and vision, she was able to achieve great results for her company and their customers in the workforce management arena.”

The other finalists for the award include Kanchan Basu of Dish Network, Jeffrey Bretana of Navy Federal Credit Union, Steven Miles of TTEC, and Darrin Scholes of First Tech Federal Credit Union.   The winner was announced at the 20th SWPP Annual Conference, which was held in Nashville, Tennessee, on April 4-6, 2022.

Jessie Cessna is Resource Planning Director for Cigna insurance with over 4000 agents using Genesys Decisions, IEX, Intradiem, Cisco, and Verint Quality.  She is highly organized and has a process improvement background, along with a communication degree that has provided a very effective communication path with the operation.  She holds a Green Belt in Six Sigma, and describes herself as a utility player. She has led all different types of WFM functions, including Capacity Planning, Demand Forecasting, Scheduling, and Real-Time Management, so she has a well-rounded approach to workforce planning.

Jessie has been in WFM for 18 years including 10 years at JP Morgan Chase working in various roles. She has been with Cigna for two years, supporting 4,200 FTE in a global setting that handle over 36 million contacts annually. She leads a team of 23 analysts that handle scheduling, forecasting, and planning in WFM and she has implemented both Quality and WFM tools.  She was originally brought onto Cigna in a Principal role to facilitate process improvement and serve as Chief of Staff for the Managing Director. She quickly received the opportunity (after less than four months at Cigna) to take on the Planning Team.

Since coming to Cigna, Jessie has been instrumental in driving value-add changes into the workforce planning process as well has supporting the implementation of workforce planning at the enterprise level.  Using her extensive knowledge while focusing on building a highly-skilled team has enabled her to drive efficiencies and new methodologies that have contributed to significant savings to the organization.

Jessie developed an end-to-end process for tracking initiatives impacting forecasting and capacity planning models. This process was designed to prevent overlapping benefits, prioritize scheduling of initiatives, and highlight the changes to forecast assumptions (i.e., Average Handle Time (AHT), Demand, Shrinkage, etc.). The result of this process enabled Jessie and her team to accurately assess the impact of multiple layered initiatives to capacity and performance and contributed to an operational savings of $21M.

Jessie’s team also includes a group focused on Data and Insights, where they have been able to develop visualization to help the business be more informed on their year-over-year and month-over-month KPIs, along with Full-Time Equivalent (FTE) waterfalls (traditionally created in Excel) now created in Tableau. Now they have the ability to see these waterfall charts that show information in 47 different cuts with a click of a button.

Jessie has had many other accomplishments throughout her tenure with Cigna, including:

Jessie describes herself as a servant leader, most importantly creating a culture of trust. She builds high-performing, engaged teams and she is always looking after the welfare of her team and how it will help the greater good.

Digging a Little Deeper to Choose the Best Metrics for WFM

Musing On Our Metrics

WFM in a Bot-Infused World

Back Together Again in Nashville for the 20th SWPP Annual Conference