This article details the results of the most recent SWPP quarterly survey on critical workforce planning topics. In this survey, which focused on job roles and backgrounds of workforce management professionals, approximately 200 call center professionals representing a wide variety of industries participated and provided insight into numerous workforce planning questions. The same questions were asked in 2004 and a comparison of the results is also provided to see the changes  over the nine-year period.

The participants in the 2013 survey are nearly half from centers with over 500 agents, with between 11-13% from those with 50-100, 100-200, and 200-300 agents. In the 2004 survey, the  largest percentage (34%) of the participants was from large call center operations with over 500 seats, followed by 21% with 100-200 agents. However, 23% of the 2004 survey participants represented centers with 100 or fewer agents. In  both surveys, all types of call center operations were represented in the study, with the biggest percentage representing financial, insurance, telecommunications, and outsourcers.

The survey participants were asked to  select the job title that most closely matched their own. In the 2013 study, Workforce Analyst grew to 40% of the total while it was 23% in the 2004 study. Workforce Manager dropped from 35% to 24%. In 2013, 29% of the participants chose titles such as Manager, Director, or Vice-President, while in the 2004 study, only 16% of the respondents chose those titles. 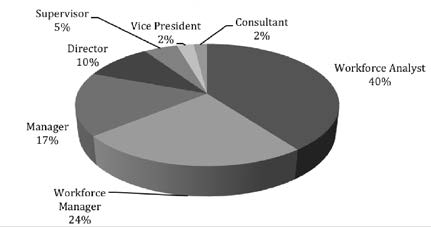 The survey respondents were generally very well educated.The percentage with college degrees rose to 52% from the 45% reported in the earlier survey, and graduate degrees rose from 16 to 17%. While those with some or no college were 39% in 2004, it has dropped to 31% in the more recent survey. While many of the degree-holders studied Business or Computer Science as their major area of emphasis, there were degrees as varied as Education, Wildlife Management, and Latin  Studies. Nearly all ofthe graduate degrees are  MBAs. 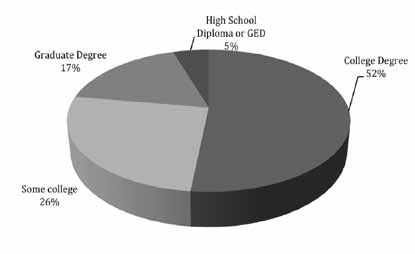 There was a fairly even split of women and men among the survey participants in both surveys with a reversal in the male to female ratio. While females were 52% of the respondents in 2004, they are 46% of the current participants and males rose from 48% to 53%. 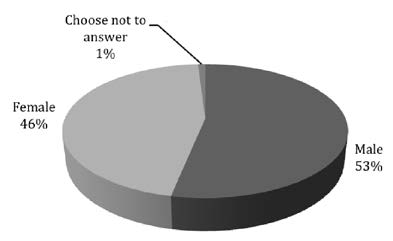 Length of Time in Workforce Management 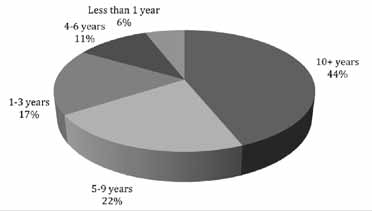 A large majority of respondents perform multiple job functions within the workforce management area and that has not changed in the two surveys. “Other Analytical Duties” topped the list in both surveys. Management of the WFM team has  increased in the most recent survey and tops those with Forecasting, Scheduling, and Intra-day Management duties whileit was fewer than all three of those in the 2004 study. This is generally reflective of the change in the demographics of   the study participants by job title reported above. Managing other teams or teams of agents remains relatively low in both studies but still is a reported duty of over 25% of the total participants. 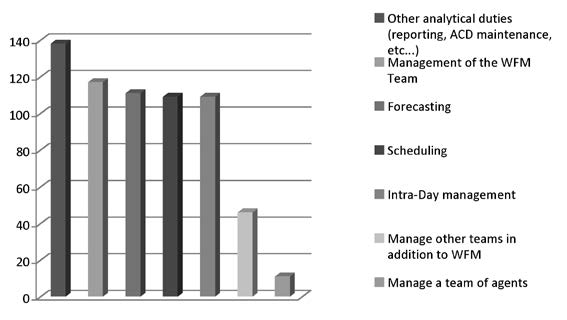 Seventy-eight percent of the survey respondents are responsible for multiple call center sites and this has grown considerably from the 58% who reported multi-site operations in the 2004 survey. This follows the number of agents in the   centers noted in the first question of the survey with a shift to the larger centers participating in the survey. 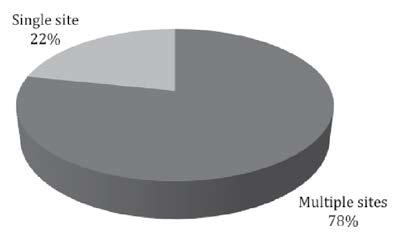 Survey participants were asked if they had held a job in the call center prior to joining the workforce management team. Those who were supervisors rose from 23% to 27% while team leaders dropped from 16% to 10%. Front line agents rose  from 18% to 21% but analysts remained steady at 15% to 16%. Those who had never worked in a call center before dropped from 9% to 5%. It does appear that the WFM roles are being filled internally in many organizations with promotions from within, although some of these may have moved between centers and employers in the industry. 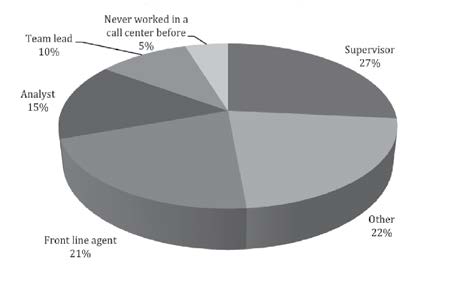 Today’s workforce manager is an educated, multi-talented individual. These individuals have many different titles, as well as different responsibilities, but many have found a profession that they are staying with over a long period of time.   There is almost a 50/50 split of women and men, and they are generally entering the workforce management profession from another job in the call center. Over the nine years between the studies, the experience level has grown along with  the levels of education evident in the participants. The complexity of the tasks has increased and the sophistication of the tools reflects the emphasis on analysis and solid decision-making evident in the workforce management role today.