Almost half (46%) of the respondents come from larger centers with over 500 agents with another 14% representing those with more than 300 agents. However, the remaining 40% come from centers under 300 agents and some under 50. This gives a broad cross-section of size. The insurance industry is the largest group represented with financial and telecommunications close behind. 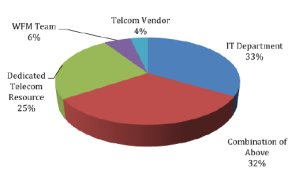 When asked who designs the number of trunks that are used in the phone system to support the contact center, the results are spread largely over the IT department, a dedicated telecommunications resource, or a combination of multiple parties. Only 4% depend on the telecommunications vendor, with 6% putting that role in the WFM team. It is important that the communications between the call center and the trunk design team are solid to ensure minimal busy signals to callers and sufficient capacity to meet the needs for outgoing calls and other organization phone needs.

For those who indicated that they have a goal, the most common answer (75% of respondents) is less than 2%. For 15% of the respondents, the goal is between 2% and 5%, with only 4% total having a stated goal of more than 5% busy signals. In general, the goal is designed to measure the occurrence of busy signals in the busiest hour of the busiest day from a telecommunications and trunk design perspective. However, the percentage can be measured across longer periods and may be applied in the call center over a day or longer. As trunks cannot be easily added and subtracted like agents logged in, the goal is typically quite low to represent a worst-case condition.

Approximately one-third (32%) of the respondents indicated that the caller who hears a busy signal will receive no other message and be forced to retry the call later. However, 28% have added a message that explains the busy condition and provides the suggestion to try again later. Only 8% indicated that some other situation occurs, while 32% indicate that they do not know what happens if a caller reaches an all trunks busy condition.

Over two-thirds of the respondents indicated that on a typical Monday, almost no callers would hear a busy signal, with 8% indicating that less than 2% would. However, 16% of the respondents indicated that they do not know how many would hear the busy signal. It is good to check the situation throughout the year, especially during the busiest seasons to ensure that callers are not being blocked at the front door trying to reach your center. It is also good to make sure that when trunks are shared with the rest of the organization that many calls in queue will not block the entry for other callers trying to reach other parts of the company.

Use of Trunks to Manage the Queue

When asked if the center would switch off some trunks to prevent callers from entering the queue when the time in queue is unacceptable, 77% indicated that this is never done. Interestingly, 8% indicate that they will switch off trunks occasionally and another 2% do it often. This can be an effective technique to limit the depth of the queue and the wait that callers will experience in a seriously understaffed situation. The question to be answered is: “Is it better to let callers into the queue to wait a very long time or return a busy signal that indicates the center is overwhelmed?” For example, in a technical failure such as a power outage or major server downtime, can the caller get a message that indicates that the company is aware of the problem and is working on it by hearing an actual message or will they receive a busy signal? Some organizations have adopted a technology that allows for virtual queuing in these situations. The system is used when the length of queue reaches a preset threshold and tells callers they can stay in queue virtually by keying in a telephone number for a callback. When an agent is available, the system dials out to the caller next in queue and connects him/her. While the wait for an agent is essentially unchanged, at least the caller did not need to hold on the line the entire time.

The rest of the respondents spread out significantly in response with 12% indicating their goal is less than 2% abandons but 15% allowing it to grow to 10%. To some extent, this goal may be influenced by how the ACD system measures the abandonments. For example, if the caller hears a message while in queue that answers the question (such as the indication of a system or power failure) and then hangs up, the caller is satisfied but the ACD counts the abandonment the same as it would a caller who tired of waiting. Analyzing the timing of the abandons may provide useful information to better understand caller behaviors.

There are a number of different ways that service level can be calculated and not all systems are set to default to the same method. This can cause some challenges when comparing system outputs (such as WFM vs. ACD) or comparing performance between sites that use different technologies. When asked how the calculation is applied in their centers, more than 60% indicated that they use the formula that divides the number of calls answered within the goal by the total number of offered calls. However, almost one-third of the respondents indicated that the metric uses only the total calls handled in the divisor, ignoring all abandoned calls. Another 30% indicated that they did not know how the calculation was done, with about 18% indicating that their method is none of those offered in the survey choices. Whether you choose to include all abandons, only abandons that hung up after the service goal number of seconds, or some other selected wait is entirely up to your organization. However, it is a good idea to identify the calculation method that is being used in each system and ensure that they are all set to a common process 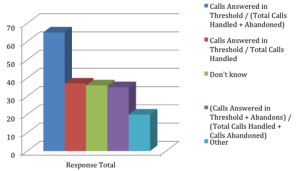 When asked what percentage of their abandoning callers retry in the short term, almost half of the respondents indicated that do not know (48%). The rest are evenly split between almost all and a small fraction. The behavior of callers can vary significantly depending on why they are calling and what other options are available to them. For example, if calling for a commodity that can be found in numerous places, the caller who abandons may call another company immediately. However, if this is the only source of resolution for the caller (such as a billing question), the callback is almost inevitable if no other media options are attractive.

Abandoned Call Use in Staffing Calculations

When asked whether the staffing calculations take abandoned calls into account, over two-thirds indicated that they are included. Twenty-three percent indicated that they do not include them and another 9% do not know if  they are. This can be an interesting challenge as it is difficult to determine how many of the abandoned callers do retry and reach the center later – thus counted as a handled call. However, these callers were not handled in the time period that they first attempted and assuming that the volume should predict them in the period when handled may help to perpetuate understaffing in the peaks. Ignoring them entirely may also become a self-fulfilling prophecy since the staffing will be planned only to handle the calls that were successfully completed. To some extent, the best choice for how to handle abandons depends on the percentage of abandons. If it is a small percentage (under 3-5%) and only happens in the highest peak times, they may be safely ignored. However, if the loss is higher than 5%, ignoring these abandons can result in an understatement of the forecast workload during peaks that will cause these abandons to occur continuously.

The respondents were evenly split between those that provide 24 hour, 7 day per week operations and those who do not. This is often a strategic decision driven by market position, the number of time zones covered, and the intensity of caller need. It is useful to analyze the calling patterns at least once per year to determine if there are enough calls during some hours to justify continuing to staff the center. Likewise, for those centers that are not open around the clock, analyzing the demand during the closed periods may reveal that too many callers are being turned away. Only 39% of the respondents indicate that they track call attempts when they are closed, with 33% using call attempts after hours to assess whether a change in the hours of operation is needed.

Based on the responses above, management of the telecommunications resource (trunks) is largely left to the IT and Telecommunications staff. Goals for limitations on busy signals and abandonments vary widely and the use of busy signals and/ or abandonments in the staffing models and service level calculation varies as well. This makes it difficult to compare one organization to another or to achieve what some people wish for, the elusive “industry standard.” While it is important to understand the implications of different choices in these areas and to ensure that all systems are calibrated to support that choice, comparisons can be deceiving.

We appreciate your participation in this study and hope that you will participate in our next survey in this newsletter, which focuses on forecasting processes.