Each quarter SWPP surveys the workforce planning community on critical workforce planning topics. Two hundred call center professionals representing a wide variety of industries participated and provided insight into this quarter’s survey on the use of schedule exceptions in the WFM process.

Fifty-one percent of the respondents in this survey work in centers with over 500 agents. The rest are representative of a wide variety of sizes from under 50 up to 500 agents. The financial, heath care, insurance and “other” industries drew the largest number of participants, but all other industries are also well represented.

Respondents were asked who on the team enters schedule exceptions into the WFM system. Multiple options could be chosen as some organizations share this responsibility among team members. The most common answer was WFM team members at 180 of the 200 respondents with 27 mentioning WFM interns. However, 71 indicated that supervisors also do this data entry. Very few do not enter exceptions at all. 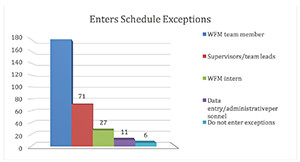 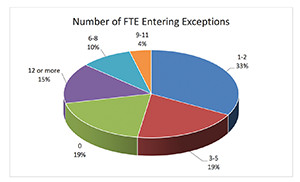 The respondents were asked what types of variations from the schedule can be utilized as a schedule exception. Once again, respondents were offered the option to select more than one answer. Over 165 of the 200 respondents chose all the scheduled activities including coaching, training, and team meetings as well as special projects. Approximately half also included the unscheduled training, coaching, and team meetings as well as tardiness. Few accepted early logins or long calls. In most centers, there is a small percentage of schedule time that can be used to account for variations without an exception needing to be entered. For example, if the adherence goal is 95% of the 8-hour schedule, 5% of the day (or 24 minutes) can be out of adherence without impacting the agent’s performance results. This generally accounts for a few minutes on long calls past break time, an unscheduled bathroom break, etc. As a result, schedule exceptions for the small variances are generally avoided saving WFM time without impacting the agents. 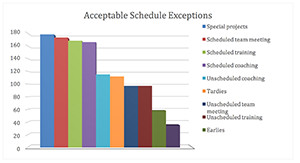 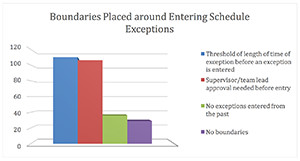 When asked if their operation allows exceptions from the past to be entered, over two-thirds do allow this. For many operations, one purpose of the entry of exceptions is focused on agent time accounting for payroll and/or performance measurement. Others focus their exception entry process on providing as up-to-date data as possible for intraday performance management. More than half of the respondents indicated that they only allow specific types of past exceptions to be entered. When asked to define the most common past exceptions that are entered, those things that are out of agent control were the most frequent answers (such a team meeting that ran long, adhoc coaching or meetings, system downtime, etc.). Some mentioned any item that affects payroll. (It is possible that interpretation of the question on the survey varied so that some thought “past” was a day or more earlier while others may have thought of it as earlier in the same day.)

Respondents were asked if there is a cut-off time for entering schedule exceptions and more than half indicated that there is no set cut-off time. The rest are split among the choices from less than 1 day ahead of time to a week ahead. The earlier the changes are known and entered into the WFM system, the sooner that reforecasting, break optimization, overtime, VTO, and other short-term management decisions can be made. 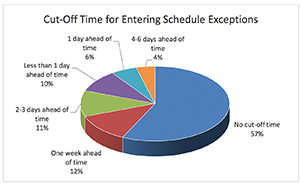 The respondents were evenly split on whether an exception needs to be a minimum length to be accepted.

Over three-quarters of the respondents indicated that they do have clearly defined standards for schedule exception handling. This is important so that all team members know what is acceptable and expected.

Based on the responses above, there is a lot of effort involved in the tracking and entering of schedule exceptions into the WFM system. When the WFM system is directly linked to the payroll process, the level of detail required is often high. However, entering exceptions to adjust for minor variations to support achievement of specific adherence goals may be somewhat counter-productive.

Considering the time it takes for an agent to identify and request an exception, a supervisor to approve it and WFM to enter it, the time lost to the process often exceeds the actual time lost to the exception itself. It may be worthwhile to consider the investment in the process when determining what should be tracked and minimum requirements versus the adherence percentage goals. In some cases, centers have found that lowering the percentage goal a few points and significantly reducing the tracking of small exceptions has resulted in a more efficient operation and improved employee satisfaction.

It is important to identify and track shrinkage and build it into the planning process on a realistic basis. Using goals and entitlements to plan for shrinkage can often result in mismatches between the planned and available staffing. Misuse of the exception process can conceal the true shrinkage data making it more difficult to get the forecast for staffing plans accurate in the first place.