Four Reasons to Remove Forecast Accuracy from your Performance Evaluations
Definitions and Decisions for Scheduling Success
WFM Winter Survey Results
WFM Spring Survey
What is Shrinkage? And Why is it so Important
Stitching Together Forecasts
Scheduling Ieas from SWPP Annual Conference Attendees
Events Calendar
Bright Idea
Our Sponsors
Join SWPP

Each quarter SWPP surveys the workforce planning community on critical workforce planning topics. Over 170 call center professionals representing a wide variety of industries participated and provided insight into this quarter’s survey on speed of answer goals.

Forty-three percent of the respondents in this survey work in centers with over 500 agents. The rest are representative of a wide variety of sizes from under 50 up to 500 agents. The financial, heath care, and insurance industries drew the largest number of participants, but all other industries are also well represented.

Respondents were asked who is responsible in their operation for defining the speed of answer goal. Nearly half indicated that it is the contact center VP or director. The workforce manager was cited by 22% and the contact center manager by 13%. Nearly one-fifth of the respondents chose “other” which may include senior management and/or marketing as possibilities. In general, the speed of answer goal needs to be tied very closely to the company mission and vision so that it delivers the customer experience that the company desires. However, it must also be closely tied to the budget that is allocated to the center to ensure that the resources match the goal. 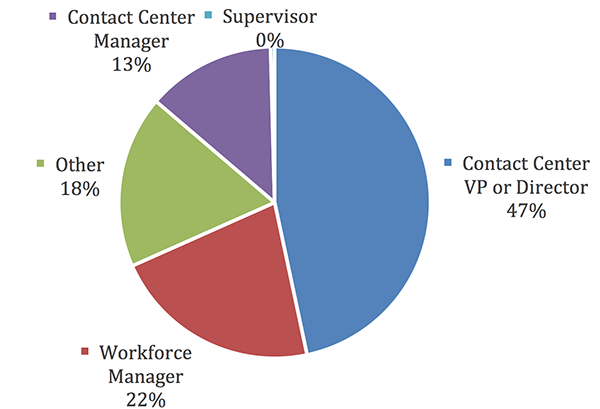 Definition of Speed of Answer

When ask what definition of speed of answer is used in the center, respondents were offered the most common metrics as choices. Slightly over half of the respondents indicated that they use only service level while 18% chose average speed of answer or ASA. Over one-quarter of the respondents indicated that they use both service level and ASA. While this is a reasonable practice if one goal is applied to each skill, using both to monitor a single skill can be deceiving and counter-productive. The math behind the two calculations are quite different and the number of staff needed to meet the goals will vary in one direction as the volume changes, and in the opposite direction when the handle time changes. There is no “best” goal to choose, but it is recommended to pick one of these goals and ignore the other. Only 4% chose “other” as their goal and it is often abandonment rate. This is a difficult goal to use for planning purposes as human behavior is not entirely predictable and the mathematics behind staffing calculations can only guess what people will do.

The respondents were asked what percentage is used as the first number in the service level goal definition. The most picked response was between 76 and 80% (39% chose it), with between 81 and 85% next at 22%. However, there are wide dispersions with 16% choosing below 70% and 8% choosing above 90% for their goals. In general, a percentage that is low provides a lot of potential for wide variations in the service as those below the goal number of seconds can wait a very long time. The percentage only determines if the goal is met or not, but if not, it provides no indication of how long that person waited, and it can be a long time. Looking at a report that shows the distribution of actual wait times can be revealing. If the percentage goal is very high, there is little margin for error so that staffing to the peaks can result in some over-staffing in the valleys, while staffing to the average demand will likely result in missing the goal. This is probably why over 60% of the respondents have chosen goals between 76% and 85%. 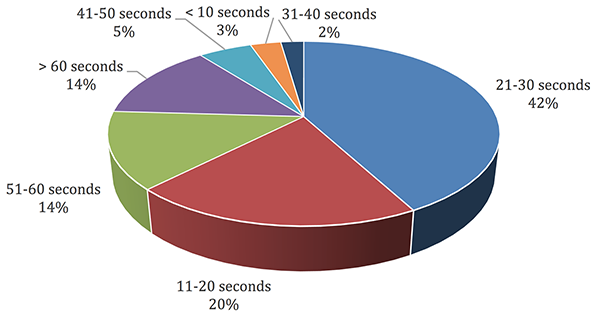 The most commonly chosen number of seconds of wait allowed in the service level goal is 21 to 30 seconds (chosen by 42%). One-fifth of respondents chose between 11 and 20 seconds. The rest are widely dispersed from under 10 seconds to over 60 seconds. The same principles apply to the number of seconds goal as the percentage portion of the goal. Long times may cause the variations in service experiences to be wide, while very short can result in significant idle time for the agents to ensure customers do not wait more than a few seconds. Striking the right balance in the service level goal is key to the organizational results and the planning process. Some centers must answer quickly (such as emergency response centers), while others may position human response as a second choice behind self-service options such as voice response systems or web options. 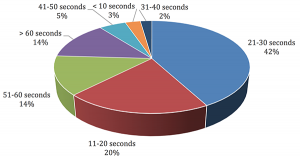 Respondents were asked if they have a goal for an abandoned call percentage. Nearly three-quarters do have such a goal. It is a useful statistic to track, especially in a sales environment, but it is not a number to use as a staff planning goal as it is an unreliable predictor. Where a goal has been set, over 60% have set it at between 3% and 5%, but another 5% of respondents have set the goal to 10% or higher. 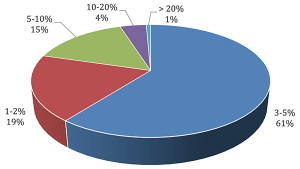 Longevity of the Goal

Respondents were asked how long the current goals have been in place. The answers are widely dispersed with 31% indicating between 1 and 4 years, but 25% indicated it has been longer than 10 years. It is reasonable to reconsider the speed of answer goals on a regular basis to ensure that they still reflect the current competitive environment and budget situation. Of course, for those organizations that must respond to either contractual or regulatory demands, the goals must continuously reflect those 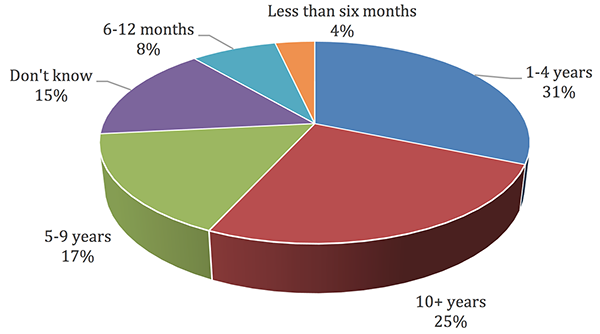 Measuring achievement of the speed of answer goals varies in terms of the interval percentages. Just over one-third of respondents either measure the average across the hours of the day or the average across the month. Much smaller percentages of the respondents measure across the week or focus on the percentage of periods within a day that met the goal. Some other measurement period was indicated by the 14% who whose “other.” Measuring across long periods provides a significant potential for there to be wide variations within the time frame such as very low results on the busiest days with well-above goal results on slower days. 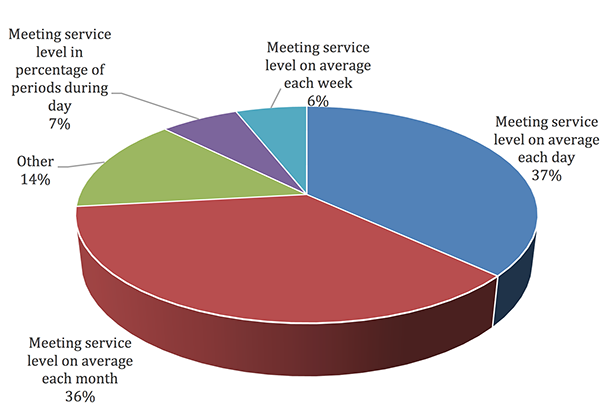 Respondents were asked in what percentage of the half-hours of the day that their speed of answer goal is met. Over half indicated that it is met in over 70% of the periods. A roughly equal percentage (6-7%) indicated that it is met in either less than 50% of the intervals or over 90%, while nearly a third are somewhere in the middle at between 50% and 70% of the periods. These results suggest that centers are focusing on consistency of the results as well as the percentage on average and this better ensures that customers have the same experience regardless of the time or day of the contact. 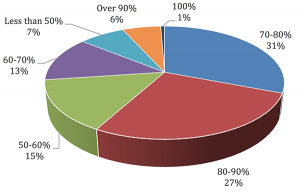 Respondents were asked if they measure customer satisfaction with the speed of answer delivered by the center. Almost two-thirds do not measure customer reaction to speed of answer. Some other industry surveys suggest that customers are not as concerned about speed as they are about quality and first contact resolution, although there is a definite limitation to the tolerance for long queues. 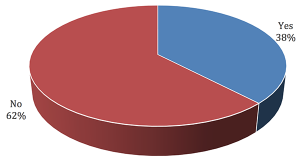 Respondents were asked if they have plans to change their speed of answer goals and more than 80% do not have any plans for change. However, 11% indicate that they plan to raise it and 6% plan to lower it. 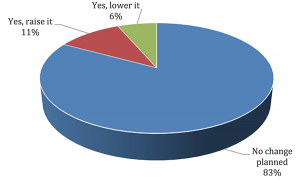 Based on the responses above, speed of answer goals vary significantly across the mix of centers covered in the survey respondents. This suggests that there is an effort to match up the goals to the unique situations within each center as there is no one “right” goal or “industry standard” that can be applied to all centers or even all skills in a single center. It appears there is a move toward focus on consistency of results over just averages, but more correlation between what customers find acceptable and what the goals require would be useful.

INSIDE Four Reasons to Remove Forecast Accuracy from your Performance Evaluations
Definitions and Decisions for Scheduling Success
WFM Winter Survey Results
WFM Spring Survey
What is Shrinkage? And Why is it so Important
Stitching Together Forecasts
Scheduling Ideas from SWPP Annual Conference Attendees
Events Calendar
Bright Idea
Our Sponsors
Join SWPP