One of the biggest staffing problems that call centers face today is staff turnover. Finding and then retaining qualified staff has a huge impact on the bottom line as well as to quality of service.

You should be taking a close look at some of the numbers associated with turnover if you hope to manage it better. The two most important numbers are the rate of turnover and the cost of turnover. This article will take a look at ways to calculate turnover rate in several different ways.

Turnover is at an all-time high in today’s workplace, and some of the overall turnover statistics have significant implications in the call center. According to the United States Bureau of Labor Statistics, workers aged 20 – 24 stay with an organization only 1.1 years on average (compared to 1.5 years just 15 years ago), and workers aged 25 – 34 stay 2.7 years (compared to over 3 years in the 1980s). Compared to these longevity numbers, call center workers who generally fall into this age group (ages 20 – 34) stay only about one year.

Research studies by callcenterjobs.com indicate that the rate of turnover varies by area of the country, employment factors in a specific region or city, and by industry. There is a much higher turnover rate in routine, order-taking positions or in outbound telemarketing where burnout is high. Turnover is lower in more specialized, higher level jobs and also lower in union environments.

Overall averages for the call center industry as a whole range between 30 – 45 percent, with some centers having almost no turnover, and other centers having turnover in the triple digits.

Like almost any benchmarking numbers, it’s frankly not all that important what the turnover rates are for other call centers or for the industry in general. What’s important is what the
turnover rate is in your center and what you can do about it.

You should calculate the turnover rate for your center on a regular basis and in many different forms. You’ll want this number for trending purposes and business case justification for programs to assist with retention.

This simple calculation gives you a good starting point, but isn’t all that useful by itself.

You’ll want to take a look at your turnover rate in many different ways. Here are some of the variations that will be interesting and perhaps more actionable than just the overall turnover rate. 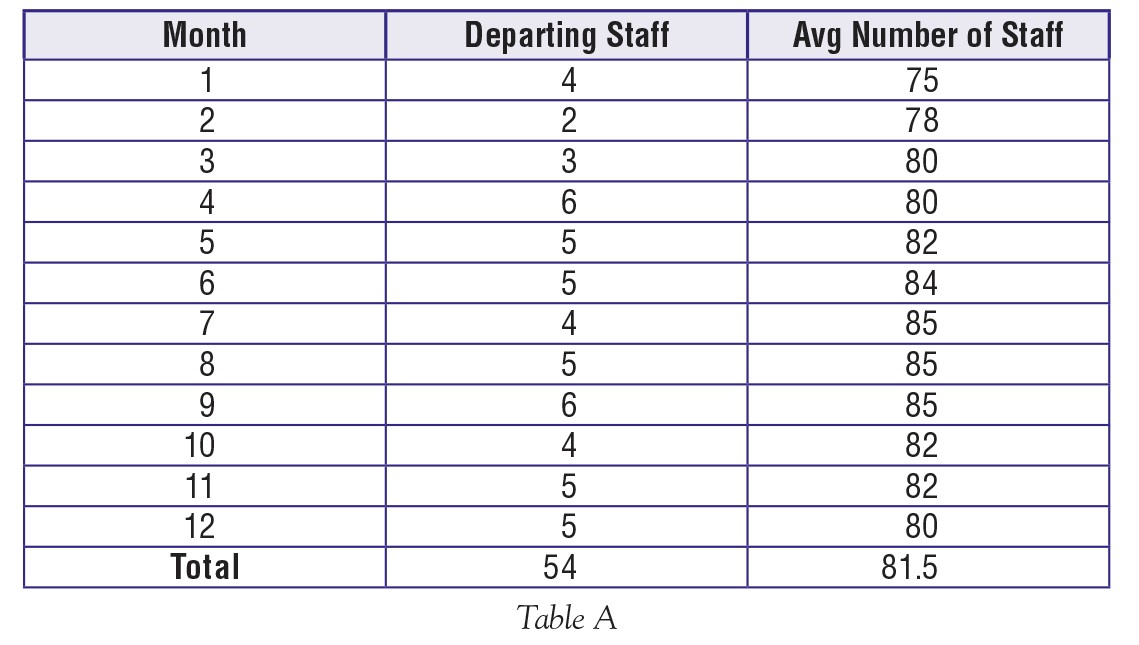 The key is to track the exit rate from the center into other positions and build this into your staffing and training plan. One large financial organization has a high percentage of loss
to other departments with the call center seen as an easy entry point to the company from which one can springboard to other positions. Rather than bemoaning this fact, they’ve tracked and documented the exodus and gotten extra budget dollars for staffing and training programs for preparing staff for taking other positions in the company.

Turnover should also be analyzed to understand the proportion of agents who make the decision to leave the company compared to those that are being terminated. If your company has to terminate significant numbers of employees due to poor performance, there may be a problem at the recruiting and hiring phase. The company may be hiring too quickly in order just to fill seats and may not be screening carefully enough for necessary knowledge and skills or evaluating the personality match with the work environment.

Turnover rates should be calculated for the center, but should also be calculated for smaller defined groups. For example, turnover should be examined by team or supervisor. Calculating turnover rate by team may help pinpoint problems where employees are leaving due to supervisory issues and not because of compensation, job fit, or other factors. Those supervisors or  team managers with consistently high retention rates can perhaps serve as “retention models” for other supervisors who can learn from their motivation and management techniques.

You should also review the turnover statistics to see if there is any correlation with the skill or type of calls being handled. Calculation by call type in one organization revealed nearly double the turnover rate for one particular type of call versus any other one due to its difficulty and higher stress levels. When that center was able to allocate more resources to that call  handling group and alter performance expectations slightly to make it a less stressful environment, retention improved significantly.

It should be noted that while turnover almost always has a negative effect on the call center, there are some positive aspects. If you are losing personnel that were not performing well, the opportunity to hire replacements can be a positive experience. Bringing in new personnel provides an opportunity to gain new ideas and to obtain some fresh perspectives. One of the ways to evaluate turnover rate by performance level is to divide your staff into performance groups. The first table illustrates a situation where turnover is troublesome. The top quarter of performers has a turnover rate of over 30%, while only 15% of the poor performers are going out the door. 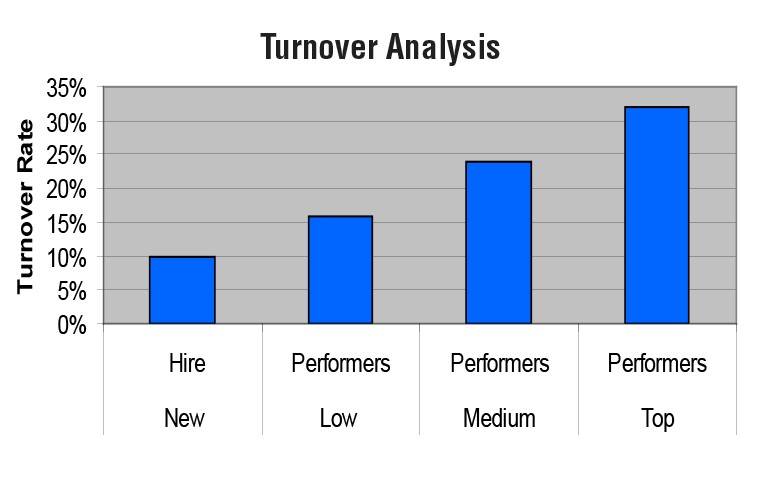 On the other hand, the second table represents a turnover situation that might not be viewed as negatively. In this example, the center is doing a good job of keeping good people, with only 5% of the top performers leaving. Turnover rate is high for the poor performers at 35%, but if you’re going to lose staff, it’s better to have the non-performers leaving. 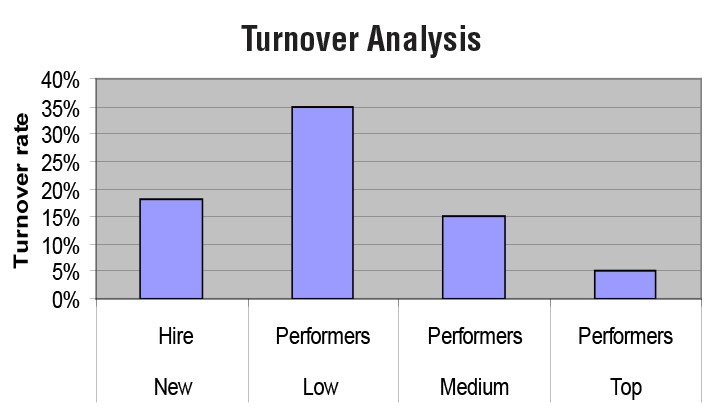 You should be taking a close look at your turnover numbers if you hope to manage it better.