In previous issues, you’ve learned about preparing data for forecasting and how to use time series analysis to arrive at a monthly forecast using trend and seasonality analysis. This article explores the step-by-step process of breaking down a monthly forecast into weekly, daily, and interval forecasts.

The forecasting process so far has yielded a monthly forecast. This forecast was created using a time-series approach that identified and applied trend rates and seasonality factors to arrive at a base forecast. Base forecasts are then adjusted for any day-of-week differences in the month, as well as any adjustments needed to reflect business drivers.

To predict March calls, first factor in a trend rate for three months.

Finally, make adjustments for day-of-week and holiday differences that will impact the future forecast. In this example, monthly forecast numbers were adjusted to reflect the number of Mondays in the month and the placement of the Easter holiday. The result in this example is an adjustment to 14,700 calls.

The next step in the forecasting process reduces a monthly forecast down into weekly numbers.

Some examples of intra-month patterns might be days of the month that are heavy calling due to either external or internal events. For example, banks experience higher volumes of calls on days when customers receive Social Security payments on the third of the month, causing a shift in the first week of the month compared to other weeks—something totally out of the control of the bank.

Other businesses may impact calling rates by setting deadlines that tend to generate higher volumes as the deadline gets closer. These deadlines can be payment deadlines after which a penalty is applied or a deadline date to receive a discount.

When considering week to week patterns, the simplest scenario is one in which each week is fairly similar with no particular reasons for one week to have a heavier call volume than any other week.

In this situation, a simple percentage can be applied to the monthly number to divide into weeks.

The same process applies for call centers that operate 6 days or 5 days a week.

These numbers can be applied to a monthly forecast to arrive at a standard week.

Note that while the first week of March may be an average week, as the month progresses toward a week with the Easter holiday in it, the week before it and after it may be higher or lower and certainly days of week within the month will need to have holiday patterns applied.

Unlike this simple scenario just discussed, most centers have reasons where one or two weeks of the month will be busier than others. A common scenario is one where one week is higher due to billing calls.

In this example, past months show a higher volume of calls in Week 1 and Week 2 than the other two weeks.

With uneven weeks, select a sample month and calculate what each week’s percentage of the month would be and then apply those percentages to a future month forecast.

In this example, the first step is to calculate what a sample month’s weekly percentages would be. The first week is higher at 29.5% of the month.

In order to break down a weekly forecast into a daily forecast, it is important to pick a sample of data that shows representative day-of-week patterns.

If there are seasonal differences, then the best approach may be to go back a year and select the same month of year. On the other hand, if calling patterns have changed over time, then the most recent month may have more predictive value.

In this example, due to seasonal differences in volumes and patterns, last March has been chosen to derive day-of-week patterns.

Look at the next table to see the sample weeks of call volume history.

Here is the starting point for the day-of-week analysis.

Once the average daily totals have been calculated, each of these daily totals is compared to the week total to calculate the percentage each day of the week represents.

As a sample calculation, compare (or divide) Monday’s average call volume of 665 by the weekly total of 3260 to derive the day-of-week percentage of 20.3%.

The forecast is now complete through the monthly, weekly, and daily prediction.
The next step is to break down a daily forecast into each interval of the day. 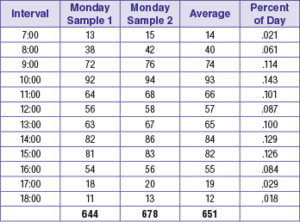 The process for calculating interval forecasts is the same as day-of-week forecasts.
Sample data is collected for the day of week to be forecast with an examination of the intervals.
Workload for call centers is most commonly forecast in 30-minute intervals, although some may be done in 60-minute or 15-minute intervals.

The next step is to calculate what percentage of the day each hourly average represents.
As a sample calculation for the 10:00 interval, 93 calls compared to the daily total of 651 calls equates to a time-of-day percentage of .143. 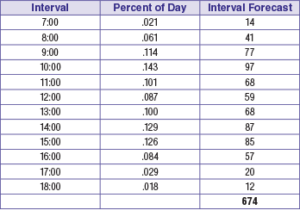 In the final step, the time-of-day percentages calculated in the last step are applied to a daily forecast.

The forecast is now complete through the monthly, weekly, daily, and interval prediction. At 10:00, 14.3% of the day’s forecast calls of 674 would yield an hourly forecast of 97 calls.

Once forecasting components have been identified, they can be used to arrive at a future forecast of calls.