Each quarter SWPP surveys the workforce planning community on critical workforce planning topics.  Over 110 call center professionals representing a wide variety of industries participated and provided insight into this quarter’s survey on the deployment of staff working at home and those in the office.

Forty-four percent of the 112 respondents in this survey work in centers with over 500 agents.  The rest are representative
of a wide variety of sizes from under 50 agents up to 500 agents.  The financial, insurance, and “other” industries drew the largest number of participants, but all other industries are also well represented.

Percentage of Staff Working at Home
Prior to March 2020

Respondents were asked what percentage of their staff were working at home prior to March 2020.  Nearly two-thirds (62%) indicated that they had less than 25% at home with another 10% answering “other” (which is interpreted to be 0% given the options offered in the survey). 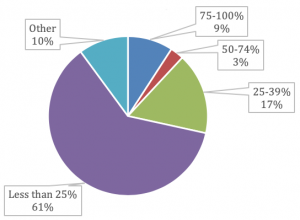 Percentage of Staff at Home at Height
of the Crisis

When asked what percentage of the staff was working at home at the height of the crisis, the overwhelming majority (92%) indicated that it was between 75 and 100%.  That is a major shift in staffing location due to the Covid-19 concerns. 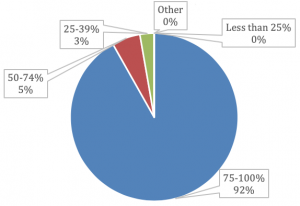 The respondents were asked what percentage of the staff are working full-time at home today (as of the time of the survey in early 2022).  Seventy-one percent said 75-100% of staff’s still at home. While this is lower than at the height of the crisis, it is well above the pre-pandemic levels.  However, it does suggest that some effort is being made to bring partial staff back into the office environment. 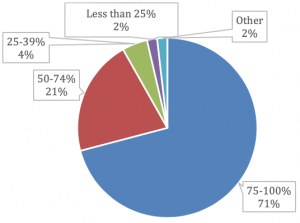 Target Percentage at Home as the
New Normal

Respondents were asked what their target percentage is for the staff working at home as the “new normal.”  Nearly half (49%) indicated that their target is 75-100% with another 30% indicating that 50 to 74% is their goal.  Only 5% answered in the “other” category which is interpreted at 0% or all working in the office.  This suggests that the option to working from home is here to stay for many workers. 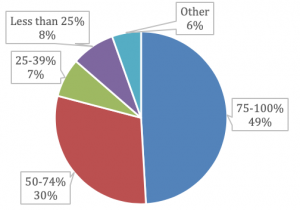 Respondents were asked what the criteria will be to determine if a staff member will work in the office or at home.  The largest answer selected was “other” suggesting that the most important criteria was not among those listed in the survey.  Next choice was job function followed closely by key performance indicators.  Tenure was chosen by less than 1% of the respondents. 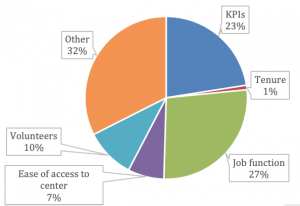 Respondents were asked if they were personally working in the office at the time of the survey.  Almost three-quarters (73%) indicated that they were not in the office.  Another 15% are working part-time in the office leaving only 12% full-time at the office. 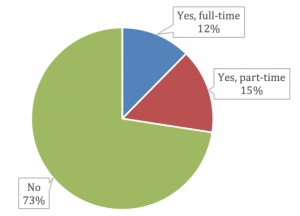 Respondent Plans to Return to the Office 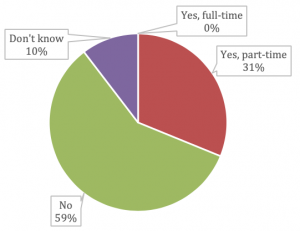 When asked to identify the hardest aspect of keeping staff engaged and productive while working at home, respondents gave a variety of free-form answers.  These are the most common:

Most Successful Method to Keep Staff Engaged and Productive

When asked to share their most successful mechanism for keeping staff engaged and productive, the respondents provided several ideas:

Based on the responses above, it seems likely that working from home will be utilized much more than prior to the pandemic.  Although there was historic resistance due to technological challenges and finding ways to supervise and integrate teams into the corporate culture, when we were forced into the model, we made it work and found it was effective.  This has significant implications for the company infrastructure as well as choices employees may make in their home environment.  Training supervisors to manage in this environment will be needed and higher levels of shrinkage may be experienced to ensure the social interactions many employees crave.

What To Do When Everyone Hates Their Schedule

Musing On Our Metrics

WFM in a Bot-Infused World

Back Together Again in Nashville for the 20th SWPP Annual Conference