WFM Survey Resultssitemanager2013-03-26T20:23:43-04:00
This article details the results of the most recent SWPP and QATC quarterly survey on critical call center management topics. In this survey, which focused on workforce optimization (WFO), just over 200 call center professionals representing a wide variety of industries participated and provided insight into numerous workforce optimization questions.This survey was previously done in the 2005 and 2008 (only with SWPP members) and we will compare the responses from the earlier survey to this most recent one.

The industries represented in this survey are heavily weighted to the Financial and Other categories with Insurance and Health Care each having more than 20% of the respondents.

Primary Role in the Call Center

The 2013 survey requested information about the primary role of the respondents within the call centers due to the joint survey process of the two associations. Prior surveys on this topic included only workforce planners and are most reflective of those views. In this case, 65% of the respondents are in workforce planning, 11% in quality assurance, 4% in training, and
the remaining 20% are supervisors, managers, or other roles. 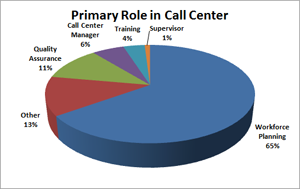 The following chart show the evolution of WFO components in the call center. 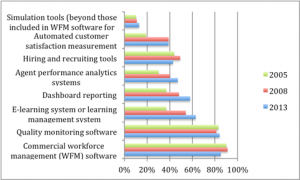 Hiring and recruiting tools have remained fairly constant between 43 – 49% and simulation remains low rising to only 13% over the 10% in 2005. Some of the change in this area is probably due to the changed demographics of the respondents including personnel from a variety of areas within the center
versus the early studies that only included the workforce planning personnel. However, some genuine growth has occurred in the utilization of the newer system offerings.

Around three-quarters of the current technology systems in the call center were provided by separate vendors in both 2005 and 2008 but that has dropped to just over half in 2013. As more sophisticated systems are developed, the perceived benefits of integration among the vendor products appears to influence the choices to purchase them from a vendor whose products are already in place in the center. However, many centers are
constrained by their legacy systems or just prefer to purchase the best tools they can find for each application, regardless of integration issues. Another influence is the total number of systems owned by each center is larger overall making it more likely to have more than one from a single vendor.

Favorite Features of Systems The survey participants were asked for favorite features of each system they currently have in their center. For workforce
management systems, many noted the reporting options available, the availability of real-time information, and agent selfservice options. For quality monitoring systems, screen capture was overwhelmingly the favorite feature. Also mentioned were the features in e-learning systems that allow users to tie courses to KPIs and tie into the workforce management software. For hiring and recruiting tools, participants liked the features that
automatically scheduled candidates for interviews, and did posthire analysis. For dashboard reporting, respondents mentioned allowing the agents to receive feedback daily and to see an overall view of multiple call centers’ performance simultaneously. They also liked the consistent feedback received from an automated customer satisfaction measurement tool, and that with simulation tools, new hires get a real feel for customer accounts. These have not changed substantially over the three surveys except that there is a higher ranking for integration of systems as a favorite in the 2013 survey.

Systems Next in Purchasing Plans 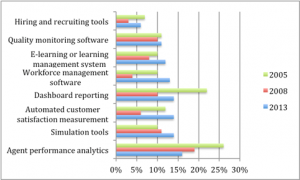 Desires for the next system purchase have changed significantly over the years and somewhat due to the change in the respondent demographics. As new systems are acquired and the market reaches higher levels of saturation, they tend to show up less on the “next system desired” questions. It is interesting to see increases in almost every category of system between 2008 and 2013 and this may be a function of the recession and the limitations on purchasing plans that now may be loosening a bit. 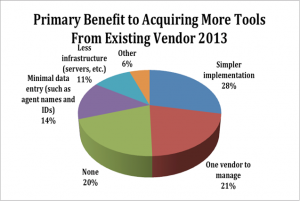 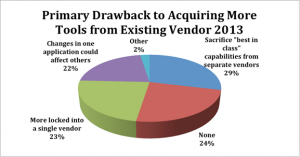 Some respondents still feel that they will sacrifice “best in class” capabilities when they purchase from a single vendor. The percentage that noted this as the primary drawback rose from 34% in 2005 to 42% in 2008 but dropped back to only 29% in 2013. The notion that you are more locked into a single vendor has remained between 21 and 23% in all three surveys while no drawbacks has risen from 10% in 2005 to 24% in 2013. Concern over changes in one application affecting others fell from 31% to 20% between 2005 and 2008 but rose to 22% in 2013. Overall, it appears that the specific drawbacks noted by the respondents have remained relatively steady over the entire survey period but the percentage who note that there are no drawbacks has risen significantly.

Survey respondents were asked what features they were looking for that were not available from the current vendors yet. Here are some of the responses from the most recent survey:

Participants were asked what workforce optimization capabilities vendors were pushing that were of no use to them. Here are some of the responses:
• Cookie-cutter solutions that every business is expected to fall into just because we are call/contact centers.

Overall, there are few features noted that were not useful, but a great deal of emphasis on getting what is being sold to work as expected.

Other Comments about the Workforce Optimization Market

We asked for any other comments about the workforce optimization market, and got some interesting answers:

Since 2005 the marketplace has moved steadily in the direction of workforce optimization with many centers owning two or more of the individual system components that typically fall in the definition of WFO. However, there appears to be more promised in the sales and marketing than is delivered with many looking for better training and support and easier integration among the products from the same vendor as well as between multiple vendors.