One of the most challenging steps in workforce management is predicting workload for future months in order to construct staff schedules. Forecasting for the future is both an art and a science. There are defined steps and processes that make up the science part, but an accurate forecast also depends on understanding your business and caller behaviors in order to fine-tune your predictions.

This article will outline the step-by-step process for creating future month forecasts based upon a simple time-series forecasting model. This forecasting primer will provide you with the calculations you need to analyze historical information and create forecasts manually or with the aid of spreadsheets. Many workforce management software systems also use this time-series process as a base for forecasting, so understanding this process may help you better understand how your software works and more easily explain the results to others.

There are several components of time-series analysis. The main two components to be examined in this article are trend and seasonality. Using time-series forecasting involves first calculating trend, which is simply the rate of change of call history. While most trend rates tend to be positive and growing, the trend rate could also be a declining rate. The standard way to calculate trend is to first look at an annual trend rate and then to break the annual trend into monthly numbers.

The other component of time-series forecasting is the identification of seasonal patterns throughout the year. However, because any given month’s data will contain the effects of both trend and seasonality, it is important to remove the trend as an influence so seasonal influences can be isolated and viewed more clearly.

Therefore, the second step of the time-series process is to “detrend” the data to neutralize the effect of trend. This detrending happens by factoring in a monthly trend factor to each month of data to bring all call history up to current levels.

The third step happens once detrending is complete and months can be compared to calculate the seasonal factors that describe the lows and highs throughout the year.

We begin with two years of monthly call volume data. This example assumes the current time is January 2016 and the last 24 months are the full years of 2014 and 2015. It is important to always use the most recent information when doing time-series analysis. If a forecast was being prepared in June, the last month would be May and the last 24 months would be June through May for two years. This sample just happens to be two January through December calendar years.

Note that there is an upward trend in the data with all months of the year receiving more calls in 2015 than in 2014. Therefore, the trend rate will be a positive annual growth rate. 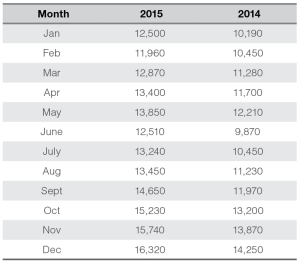 The graph below shows the last two years of data. The pattern throughout the year looks much the same in 2014 and 2015, so examining the seasonal patterns of one year should provide a good representation of month to month differences that will occur again. 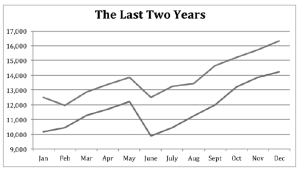 The next table shows the trend calculations for all twelve months, including the average annual change of .181 or 18%. You can see that some months had bigger jumps than others. The reason for the higher and lower percentages by month can be attributed to a variety of factors including the number of days the center was open in that month, how many of the days are the busiest versus slower days (Mondays versus Thursdays for example), and the placement of one-time events such as marketing campaigns, weather, and outages. Therefore, it is best to compute the average annual growth rate to be applied to all of the months in the upcoming forecast year but remain mindful of the monthly variations and their causes, as the forecast is refined later. 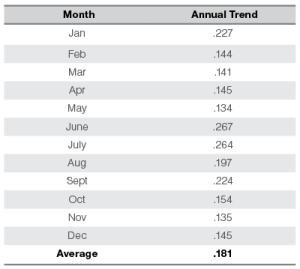 The first part of time-series analysis was to calculate trend. The other component is seasonality – the normal fluctuation of calls expected from month to month) In order to isolate this month to month fluctuation to assign seasonal factors to each month, one must first break apart the effects of trend and seasonality. Once trend has been calculated, its influence must be removed in order to look at the seasonality independently.

In order to do this, each month must be detrended. The detrending process involves calculating what every month would have been IF it happened at the current time. In other words, give each month the growth or trend that the most current month has experienced.

This concept of detrending can be illustrated by looking back at the graph depicting call volumes. Look at November and December call volumes for last year. December is a higher number, but is it higher because it is a busy month based on the company’s business or is it busier because it occurred one month later so had an extra month of trend or growth? The answer is probably both. So it’s important to “even out” the two with respect to trend. By adding one month’s trend to November, the two months are even on a trend basis so any difference in the two must be attributed to true seasonal differences.

For example, June is one of the slower months. To calculate its seasonal factor, divide June’s volume (13,678) by the base month (14,942). The factor is .915, meaning that June is about 91% of an average month. This calculation would be done for all twelve months. 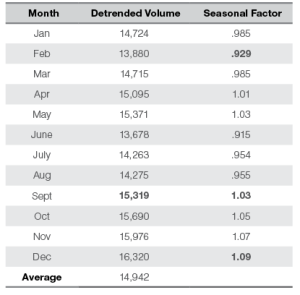 All the trend rates and seasonal factors are now complete. These numbers can be used to arrive at a future monthly forecast.

This example shows the calculations involved in predicting calls for next March.

The first step will factor in two months of growth and the second step will apply March seasonality.
In order to forecast for March, first factor in three months of trend. The base month is the starting point. This base month was calculated during the detrending process. It represents a month that has been neutralized by evening out the trend and is a neutral month for seasonality as well since it is the average of all the high and low months.

Starting with the base month of 14,942 calls, factor in three more months of trend by multiplying by 1.015 three times. The result is 15,624 calls – the prediction for an average month three months out.

The other step is to factor in the seasonal influence of March. Looking back at the seasonal numbers, we see that March is slightly lower than average with a seasonal factor of .985. Applying this seasonal factor to the average month forecast yields 15,390 calls based on trend and seasonality estimates.

The trend and seasonality factors have now been applied to come up with a base forecast. However, the forecast is not yet complete. There may be calendar influences based on what is coming up in the month. These calendar influences can be day-of-week differences – the number of weekend days or busiest day of the week. The month may also need to be adjusted based on what holidays fall into the month.

For example, consider what March influences may be. Using trend and seasonality can provide a good estimate of March 2016, but in addition to trend and seasonality influences, there may be some additional elements that require more modification.
Notice that March in 2015 had five Mondays, which are typically the busiest day of the week. With the shift of the calendar, March of 2016 only has four Mondays which will likely result in a lower call volume for the month.

In addition to day of week differences, there may be holiday differences from year to year too. In some cases the day of week on which a popular holiday falls can impact call volume. And in some rare instances, a holiday may appear in a month one year but not in the next year. For example, Easter is almost always in April, but it occasionally occurs in March. Be sure to look for these holiday placements from one year to the next and consider how the forecast may be impacted.

This forecast needs two adjustments – one for Monday impact and one for holiday impact. Mathematically speaking, there is no exact adjustment for these two changes. Forecasting is an art and a science, so an adjustment like this one is part calculation but part estimate of what you think is going to happen based on day-of-week patterns and holiday calling behaviors.

Knowing the percentage of a week’s calls that happen on a Monday versus a Thursday can help to adjust for the change in the number of each day of the week in a month. (You will learn more about that process in the next article in this series.) It is also important to maintain a history of holiday week patterns to use as a guide as you estimate the impact of Easter in this case versus a non-holiday week.

In this example, the forecast for March has been adjusted to 14,700 calls to carry forward. This reduces the total call volume to reflect the Thursday versus Monday load, and also reflects the reduced call volume on the Good Friday to Easter weekend that may have been reflected in the historical patterns saved from prior Easter holiday weekends.

The Impact of Business Drivers

In addition to the math and the calculations just described, there is another set of factors to consider that are unique to each business. Any of the following business drivers can have an impact on future call workload.

These internal and external factors can have a small or a very large impact on call workload. It is critical to stay in touch with the individuals or departments who control some of these items so there is a constant feed of information into the call center so forecasts can be fine-tuned with knowledge of all these potential drivers.

This article has outlined the process of using time-series analysis to build a monthly forecast. The next article will continue with the forecasting process, discussing how to break down monthly forecasts into weekly, daily, and interval numbers.