Forty-seven percent of the 154 respondents in this survey work in centers with over 500 agents. The rest are representative of a wide variety of sizes from under 50 up to 500 agents. The healthcare, financial, insurance, and “other” industries drew the largest number of participants, but all other industries are also well represented.

Respondents were asked who in their center enters schedule exceptions into their WFM system. Sixty percent indicated that it is someone in the WFM team with another 5% naming a WFM intern. One-quarter have supervisors and team leads doing this data entry. Only 2% indicated that they do not enter exceptions. 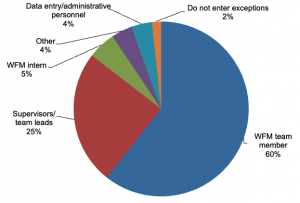 The respondents were asked to choose which of the offered exception types are utilized in their center and multiple choices were accepted. Few utilize long call exceptions, but most accept scheduled activities such as training and team meetings. Tardies, unscheduled coaching, training and team meetings are acceptable for about half of the respondents. It is important to consider both the percentage of adherence that is expected and the frequency of long calls when making comparisons among centers on this issue. Where the goal provides a reasonable number of minutes of non-adherence, long calls are generally not allowed for exceptions as that “forgiveness” is already built into the process. However, if calls average 10 minutes or more, then an exception may be appropriate. Another driver can be offering an incentive for exceeding the minimum adherence goal. In those cases, agents will look for every opportunity to have an exception entered to help them achieve that goal. 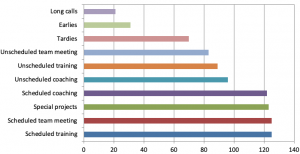 Respondents were asked if there are boundaries around schedule exceptions and, if so, which ones. They were allowed to choose more than one answer. Most of the respondents require a supervisor or team lead to approve the exceptions before they are accepted. Most also indicated that there is a minimum length of time for exceptions. Some indicated that they do not enter exceptions for the past, but a similar percent indicated that there are no boundaries. Requiring an authority to approve the exceptions submitted by agents adds an extra step and time to the process but it may help to ensure the integrity of the data. Setting a minimum length of an exception is a good practice to avoid spending excessive WFM time handling tiny adjustments which should be taken care of in the setting of the adherence percentage goal. 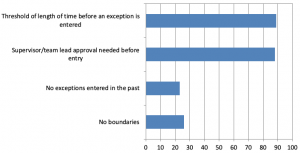 Respondents were asked what changes they would like to see to their exception process. These are the most common answers:

Exceptions in the Past

Respondents were asked if they enter exceptions in the past. Eighty percent indicated that they do while 20% do not. If exceptions are entered after the fact, or even the next day, they are not much use to the WFM team in adjusting intraday resources to meet service goals. Historical items are useful for ensuring payroll accuracy. However, entering historical exceptions simply to support agent adherence achievement is problematic.

Respondents were asked what the cut-off time is for entering exceptions. Nearly half (49%) indicated that there is no defined cut-off time. All other responses are widely dispersed from less than 1 day to more than a week ahead of time. 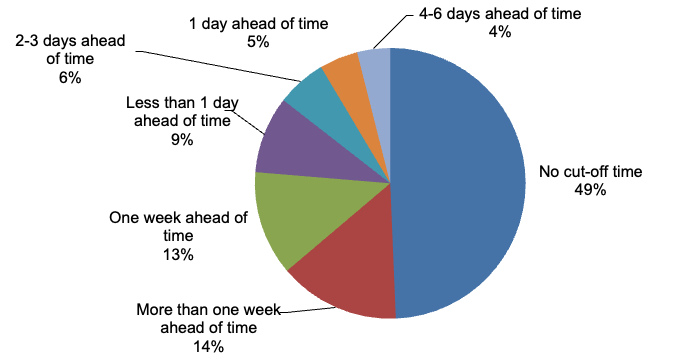 Respondents were asked if they have clearly defined standards for which exceptions to enter and how they should be entered into the systems. Nearly three-quarters (72%) indicated that they do have these definitions in place, but just over one-quarter indicated that they do not. Clear documentation can minimize confusion/misunderstandings and save time for all involved.

Based on the responses above, there are significant variations in the management of schedule exceptions. Some of this is due to the size of centers but the complexity of the contacts and the management philosophy are significant factors. In some centers, lowering of the adherence goal has vastly reduced the number of exception entry requirements, freeing up WFM personnel and supervisors for other tasks. Surprisingly, the results are often better adherence than when the goal was strict and agent morale has improved as well. While this may not work for every environment, considering the cost and overall impact of the adherence management process versus the benefit it achieves is worth some analysis.

How to be Great in WFM—Three Approaches to Training

To Have and to Hold—The Delay Experience

What is Shrinkage? And Why is it so Important?

The Return of Expert Systems